Due to the ongoing corona virus pandemic and accepting current health and safety advice as well as government restrictions, it has been necessary to postpone and/or cancel all band concerts for April and May. The band gig guide has now been updated reflecting these changes. Further postponements and cancellations may affect concerts booked for the rest of this year so the band will update as necessary as well as making use of social media to inform our friends and fans.

The ongoing corona virus pandemic is a tragic and ever changing situation with predictions regarding any return to normality as we know it unlikely to occur for several months to come. Our thoughts, and prayers are with all those people around the world who are suffering from Covid 19 and/or losing their lives in such awful circumstances as well as all those people on the 'front line' who are working to provide the necessary support to their communities across the globe.

Stay safe, stay well and remain positive...we look forward to meeting up with you all soon.

Welcome to the Cold Flame website and our latest, strictly rationed update. It has been several months since we last posted anything so a lengthy news script is in order. Reflecting on content for this year's annual band update, it would be easy to suggest that 2020 will just be another year, business as usual and let's just see what happens. All well and good but perhaps some small adjustments are necessary. One of the responsibilities of being any band leader is to react to changes as they occur if one wants to maintain a degree of continuity and respectability.
Whilst Cold Flame band personnel and backroom support remain stable and consistent, ongoing changes in social and economic trends dictate that things are changing and not necessarily for the benefit of musicians , music venues or the audiences one hopes will continue to support music in all it's forms....hmm ok..most of it's forms! It is with good reason that we have talked about ' Keeping music live' to audiences with growing regularity over the last two years.

Given, at least for me, the surprising longevity of Cold Flame, who this year celebrate their thirty sixth anniversary, I would like to think that there is still some life yet in doing what we do as a band whether as a live act or recording new material in the studio.To all our friends, fans and the mildly curious, thank you very much for sticking with us over the last few years. Your support and enthusiasm is really appreciated and we hope to see you once again,somewhere soon. There are a number of concerts now confirmed for the year which are posted on the gig guide page. Also do check out the various pages of the Cold Flame website http://www.coldflame.com which has once again been updated as well as the band's official face book site https://www.facebook.com/coldflamebluesuk

Reflecting on what is a rapidly changing social market place, it is hardly surprising that recent times have seen greater diversity in band activities. 2020 will inevitably see a continuation in this trend as new opportunities present themselves and some old doors are reopened.

Studio Work
Last year we released a new studio album - 'Waiting for God' . Fourteen original songs featuring progressive rock, folk rock and blues music in equal amounts with more than a passing nod to the music of Jethro Tull. A worthy album with a central theme and one which we will continue to promote this year. Some very positive feedback on the album so we look forward to more of the same this year. Do check out the Albums section on our website for more information on both this album and the rest of the Cold Flame catalogue. Inspired by recent studio efforts, I have once more returned to Starring Studios which is now re-established in a new base in the hills above Todmorden, West Yorkshire. Nice place but it has added another half an hour to the round trip from Derbyshire. Working alongside several members of the band as well as sound engineer Neil Scales, something new and exciting is slowly emerging. More news on this ongoing new project soon.

Cold Flame perform the music of Jethro Tull
It is always a blast to play the music of Jethro Tull so why stop now. This year will see Cold Flame performing some new Jethro Tull tribute shows with various concerts already confirmed in the UK and several more in the pipeline. Concerts already confirmed include shows in Lancashire, Cheshire, Yorkshire and Wales. The band will be performing both classic Tull material alongside some forgotten gems in a brand new two hour plus show featuring the band's five piece line up. A brand new press release 'Cold Flame perform the music of Jethro Tull' can be accessed on the About page of this website. Check out these links as well as the website gig guide, Ents 24 and similar outlets as well as face book for more information.Get your tickets in advance for all tribute shows by contacting the venues. The band are very interested in performing more Tull shows this year. Promoters from across the UK and beyond interested in booking the band's Jethro Tull tribute show - electric or acoustic can email info@cold-flame.co.uk or patflame@yahoo.co.uk

The Blues Busters
It is a fairly well known fact that Cold Flame are, amongst other things, a Jethro Tull tribute band - something that has been a feature of live shows since 1998. What might not be as well known is that the band had already enjoyed a lot of success in the UK prior to the Tull project doing a very different style of tribute show. The Blues Busters were an eight piece soul/r n b/ blues band formed in 1991 by trombone player Colin Williamson and myself who copied the music, presentation and feel of the infamous 'The Blues Brothers' complete with shades and pork pie hats. Based in Glossop, Derbyshire the band featured a four piece brass ensemble which complemented the Cold Flame rhythm section. Performing both private and public shows all over the country, the band picked up a huge following especially in the north west of England. Fitting Cold Flame shows around such a workload often proved difficult but ultimately just about manageable. After ten years the band folded only to re - emerge for occasional shows from 2005 onwards. The Blues Busters last played live in March 2015 at a special sell out concert in their home town to raise money for a close friend affected by a tragic accident. Five years later, The Blues Busters are back - well - sort of - , not this time round as an eight piece big band but rather a very slimmed down version once again based around the nucleus of members of Cold Flame,. It just feels like the right time to return, albeit briefly, to those soul and blues classics like Midnight Hour, I Feel Good and Gimme some Loving with some of the original members of the band in tow. There are two current gigs booked for this year both at the same venue - The Railway in Greenfield, Yorkshire. More dates may be added later or then again maybe not. These special dates are included in the Cold Flame gig guide found elsewhere on this website. 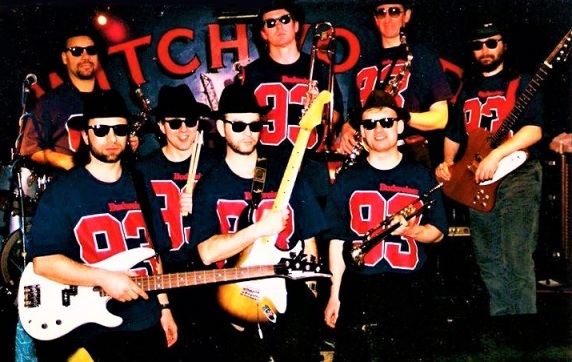 Cold Flame in Europe
Over the years, the band have performed a number of concerts/ tours in various European countries including Poland, France, Spain, Italy and Greece. It has been both an honour and a privilege to do so and we all hope to be asked to do so again in the future subject to everyone having their passports/ visas etc up to date. Whether the outcome of Brexit will allow this,is of course, debatable but for now there is still opportunity to play in mainland Europe without too many restrictions so why not !
Over the last eighteen months, alongside my good friend and acoustic blues maestro Ged Wilson, I have had the privilege of undertaking two additional tours both organised in northern France.under the moniker of 'The Ged Wilson Duo'. It was during the last French tour in September 2019, that I was approached about the possibility of playing some electric shows performing Cold Flame music. Not having other members of the band to hand, I managed to 'rope in' two local French musicians,. This led to some quick rehearsals and three low key gigs at the end of the duo tour which proved both fun and surprisingly successful.. With ever increasing travel and accommodation costs coupled with band member availability and time constraints challenging the viability of a lengthy French tour for Cold Flame to say nothing of changes imminent with our closest neighbours in Europe, the idea of putting together an 'occasional alternative line up' of French musicians to play a few Cold Flame shows in France at least, became a feasible notion. Over the winter I have managed to recruit some new musicians for such a project and I look forward to working with Claude[ guitar] Pascal [drums] and Camille [ flute] in 2020 with a setlist that will include both original Cold Flame music as well as some Jethro Tull songs..