Cold Flame was originally formed in Glossop, Derbyshire in November 1984 by bass guitarist Patrick who teamed up with guitarist Dave Conner and drummer Giles Fisher. Neil Simons made up the original four piece line up on vocals.

The band made a name for themselves touring extensively on the Manchester pub and club circuit playing their own brand of blues rock material together with several rock standards. After a brief hiatus in 1986-1987 the band returned with a new line-up including singer Andrew Mellor - another Glossop recruit and Leicester singer/guitarist Barry Stones. The band hit the road again enjoying success and extending their travels to take in some of the more prestigious venues in the Midlands and North West. At this time Leicester's Mick Whatley was behind the drum kit but was replaced in 1993 by Glossop drummer Vince Walton, a specialist in jazz and progressive rock percussion work.

Cold Flame began recording several of their original songs during 1992 and 1993. This led to the release of the band's first album in December 1993. Entitled ‘On Thin Ice’, the album contained 14 songs all written by Patrick and Dave, many of them long time stage favourites. It was recorded at The Basement Studios in Broadbottom, Cheshire as featured in Guitarist Magazine and Channel-4 TV. Lead vocals were handled by Patrick and Barry.

In the spring of 1994 Cold Flame began a major North-West tour of blues and rock venues promoting the album. In fact, the band returned in style very quickly establishing themselves as one of the more popular and potent live acts around. During this period drummer Vince left the band due to other musical commitments as did guitarist Barry. Vince's full time replacement was yet another Glossop musician - drummer Keith Bonthrone who during the 1970’s played with professional ‘cult’ band Janus a great favourite in the German and Dutch album charts of the time. Two of their albums on the Harvest record label went gold in Europe. Janus still record albums from time to time and both Keith and Patrick were involved in live and television work as well as studio recording with Janus during late Autumn 1996. 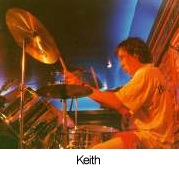 In the summer of 1995, Cold Flame underwent a further line up change when original lead guitarist Dave was forced by pressing work commitments to leave the band although he has continued to guest with them since on a regular basis - both live and in the studio. Cold Flame quickly recruited young Macclesfield guitarist Daniel Hall as a replacement and after intensive rehearsals, the band re-emerged in the autumn touring extensively throughout the North West, breaking new ground playing some of the country's premier live music venues and introducing new tracks from Patrick's second solo album 'Sands of Time' into their live shows.

Having learnt his craft in the pubs and clubs of Liverpool as well as the North West jazz scene, Peter brought added experience, enthusiasm and visuality to the band's stage presence. During recording sessions for the 'Stormcloud' album, Buxton based classically trained pianist Chas Duncan - a long time friend of the band guested on several tracks playing Hammond organ, piano and synths. 'Stormcloud' was released in December 1999 and immediately consolidated the bands position as one of the more respected rock and blues bands on the circuit. Three full scale tours occurred during the year 2000 to promote the album which gained critical acclaim in many market places and a signing to EMIs Internet company - peoplesound.com.

In July 2000, Daniel announced his intention to leave Cold Flame at the end of the year. Enter young Buxton lead guitarist Simon Dowling whose previous claim to fame was that he happened to be Patrick's cousin.Simon joined the band in April 2001 just in time to take part in an extensive bout of gigging that just about took the band everywhere over the next three months.After a brief summer recess and the release of the band's first ever live album 'Live at the Carnival', Cold Flame again ventured out onto the north west gig circuit on a critically acclaimed two month Autumn tour.

At the end of this tour drummer Keith announced his decision to return to the cabaret circuit and the band found itself in the unenviable task of auditioning for a new member of the band for the second time in less than a year.Stalybridge based drummer Dave Slater became the 4th percussionist to fill the band hot seat in Dec.2001 and looks forward to a long musical future with Cold Flame. In Febuary 2002 the band re-released their first album 'On Thin Ice', re-mastered at the Basement Studios in Broadbottom with the addition of six previously unreleased bonus tracks from the same recording sessions.

During 2002 Cold Flame toured extensively throughout the country winning over new fans with a new musical and visual approach that owed much to the music of Jethro Tull.In doing so they reaffirmed themselves as one of the premier live music acts based in the north of England.In November 2002 the band released their fourth album 'Still Burning the Blues'...a collection of new and previously tracks recorded during the last few years at The Basement Studios,Broadbottom and Shipwreck Studios,Glossop.

Throughout the spring and summer of 2003 Cold Flame continued to underline their status as one of the most exciting and original bands on the north west music cicuit.In addition the band expanded their acclaimed Jethro Tull tribute show with major concerts in many the north and midlands premier venues.In September 2003 frontman Pete Cheetham quit the band after a five year stint and was replaced by Derbyshire multi instrumentalist Ben Daglish.November of the same year saw the release of a new studio album 'The Seven Seas' again recorded at Shipwreck Studios and a return to live work promoting the album and a continuation and extension of the Tull tribute show.2004 has seen the band concentrate more fully on their Tull links as well as releasing a special mini-album 'Sports in Perfect Harmony' in June 2004 recorded with children from St.Philip Howard School in Glossop,the proceeds for which all go towards supporting the school's sports college status bid.

Davyd Simpson long time friend of the band ,local muso and multi instrumentalist to boot officially joined the band in December 2004 ,primarily as the keyboard player in the Jethro Tull tribute shows as well as occasional forays on acoustic guitar within the bands acoustic/electric gigs.In the summer of 2005 the band went through massive changes in both personnel and direction.Flautist Ben and drummer Dave left the band to be replaced by the returning Peter Cheetham on vocals flute and saxophone back after a two year sabbatical, and drummer Phil Marke.Additionally wanting to develop the acoustic side of Cold Flame music, the band formed a seperate splinter group Cold Flame Acoustic and were joined in September 2005 by Glossop fiddler/ mandolin player Paul Newland.

In late 2005 Cold Flame toured the north west in both their electric and acoustic formats following this up in December with a trip to Italy to perform alongside ex Jethro Tull musicians Mick Abrahams and Cive Bunker at the 1th Italian Jethro Tull Convention.

In 2006 whilst continuing to play concerts throughout the country the band have returned to the studio with a view to releasing at least three studio albums during the remainder of this year.

Despite lineup changes, Cold Flame continue to play extensively throughout the North West in many of the area's premier Rock and Blues venues. This is a reflection of the band's popularity and hard working ethos but it also displays the enthusiasm shared by the band members to promote Cold Flame music far and wide.